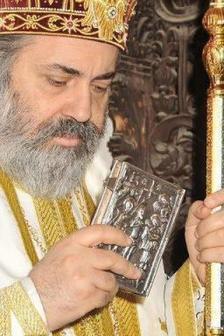 "The Spirit himself testifies with our spirit that we are children of God;
and if children, then heirs; heirs of God, and joint heirs with Christ;
if indeed we suffer with Him, that we may also be glorified with Him."
(Romans 8:16-17)

Beloved in Christ,
Hierarchs, clergy, Members of the Board of Trustees and faithful
Of this God-protected Archdiocese:

Christ is risen! Truly He is risen!

I am writing to you on the Holy day of the resurrection of our Lord, not only to greet each one of you and convey my personal salutation, as well as those of our clergy and parishioners in Argentina, but also in order to address you upon the one year anniversary of the abduction of our beloved brother Metropolitan Paul of Aleppo, Alexandretta and Dependencies.

April 22nd of 2013 was a remarkable day in our Patriarchate. On the eve of celebrating the commemoration of the Great Martyr Saint George, Metropolitan Paul undertook a new witness of faith, a witness expressed through a new commitment toward his Archdiocese, his Church and all of us.

It was a remarkable day because none supposed that he would be the engineer in charge, among many others, building the edifice of hope in our lives. This construction started a year ago, and it is still growing high in the eyes of our Lord, in depth in our lives, and in extension in the world bringing others to abide by the same hope.

All those who are concerned by such a construction stands in owe how this engineer manages to follow everything from behind the scenes, in a meticulous but very generous and professional way. The final shape of the building is not known beforehand, as is the case in engineering, because it depends on the will of Him who is blessing this construction and the will of the engineer in charge of the design, execution and supervision. Surely, this building will be one of the most amazing and spacious in modern history.

The beauty of this building is invisible. It is hidden in its foundation based on the invincible faith of the engineer in charge and his wholehearted self-offering in order that those who are suffering, mourning, lost and in despair, can find a shelter, along with all those who serve and struggle, as well as those who became victorious or are heroes.

The workers in such a construction are brethren from everywhere; no previous acquaintance gathered them, but the grace of God. They do not have any experience in such a construction, but they strive every day to strengthen themselves while they serve and witness to their faith with joy and abide by prayer and the meditation of the Word of God.

Everyone is waiting for the day when the dedication of this building will take place. Such a day will be a great one indeed, on earth and in heaven. The light shining forth on that day will be such that it will vanquish the darkness of monstrosities and consciences, as well as the multitude of sufferings and grief. The joy of that day will reveal how true and real is the word of God. It will also manifest how His promise comes to fruition and completion.

On account of this hope, witnesses from our Archdiocese in Aleppo, in their celebration of Pascha yesterday, on Saturday evening, April 19th, and today, on Sunday morning, April 20th, revealed how strongly they felt the power of the resurrection of Christ despite their lack of water, food, electricity and their basic and foremost necessities. They are on the footstep of their shepherd in sharing the paschal joy of Christ's victory over death.

For our part, on April 22nd 2014, we will light a "candle of hope" for Metropolitan Paul, for Archbishop Youhanna Brahim, and for all those who are captive in Syria, who are in danger and in grief. Having spoken only about His Eminence, Metropolitan Paul of Aleppo does not diminish or disregard at all the witness of his companion, His Eminence, Archbishop Youhanna or any other person in the same situation. Our sole intention is to give a witness to the one we know, and open the way to others to do the same. These persons teach more by their living example, but also by their silence and invisible presence, than any of us do by our words. They are examples to emulate and bow down before, in reverence and gratitude for their long term and unwavering witness to Christ on behalf of all of us.

Our continued prayers for them are recompensed by seeing this building of hope becoming higher, bigger, wider, grounded on earth but reaching heaven.

May our Lord deliver them from captivity, bring peace back to Syria, and comfort the souls of all our brethren, Christians and Muslims, in Syria!