"How to resurrect with Christ" 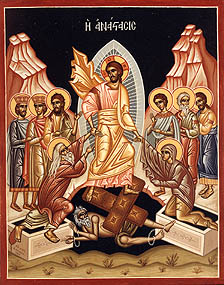 "If then you were raised together with Christ, seek the things that are above, where Christ is, seated on the right hand of God" (Colossians 3:1)

Of this God-protected Archdiocese

Christ is risen! Indeed He is risen!

Christ defeated death! We are no longer subject to it; rather we are Christ's, who gave us "the right to be God's children" (John 1:12) and to be His "friends" (John 15:15)! What great news! What a great gift! What a great reality! An eternal bond is granted to whoever believes in Christ as Savior from death - divine adoption in Christ's name!

Christ defeated death in our reality! He gave us the gift to start anew, to renew our heart, to purify our mind, and to reaffirm our commitment of faith at His service. He restored in us the dignity of our person, the beauty of our nature, and the bounty in our personality.

Christ defeated death in our relationships! Christ is the only mediator between God and man. However, He made us "bridges" of salvation to reach others. As Antiochian Orthodox Christians in North America, we are bequeathed an apostolic "lineage:" tradition, inheritance and mission. In this regard, the image of the "bridge" summarizes the Antiochian witness that emerges out of the past, prompts the present and prepares the future of the Antiochian Orthodox Church on the eve of the election of a new Metropolitan to succeed to His Eminence, Metropolitan Philip of eternal memory.

Christ´s victory over death is a responsibility when it is handed over to us. "I am the Way," (John 14:6) the Lord said. "We are the bridge," we would respond to Him. Indeed, the Lord means for us to be His co-workers in this most unprecedented cooperation between heaven and earth. Antiochian Orthodox, among others, are leading the work of building a bridge between East and West, between our Patriarchate and the Archdiocese, among their brothers and sisters of other Orthodox Churches in North America, among their brethren whom they invited to share this apostolic faith, toward those are in need. If Christ is the "bridge" from heaven to earth and from earth to the netherworld, saving in this way the entire creation, then you understand that being a "bridge" means to follow Christ in His openness to humanity, in bringing humanity to unity, in serving your brethren to the extent of your ability and capacity.

I am glad for your witness – a bridge that unites both ends and that is open for people to come across in both directions, and for Christ to work the salvation of each one. I am sure that, as we are celebrating our Lord's resurrection from the dead, you will treasure this divine gift of being a bridge. Indeed, I am certain that you will not spare any means to serve the Divine Providence toward humanity.

May our Lord guide all of us by His eternal light shown forth from the empty tomb!